Bongbong Marcos: We do not look back, but ahead 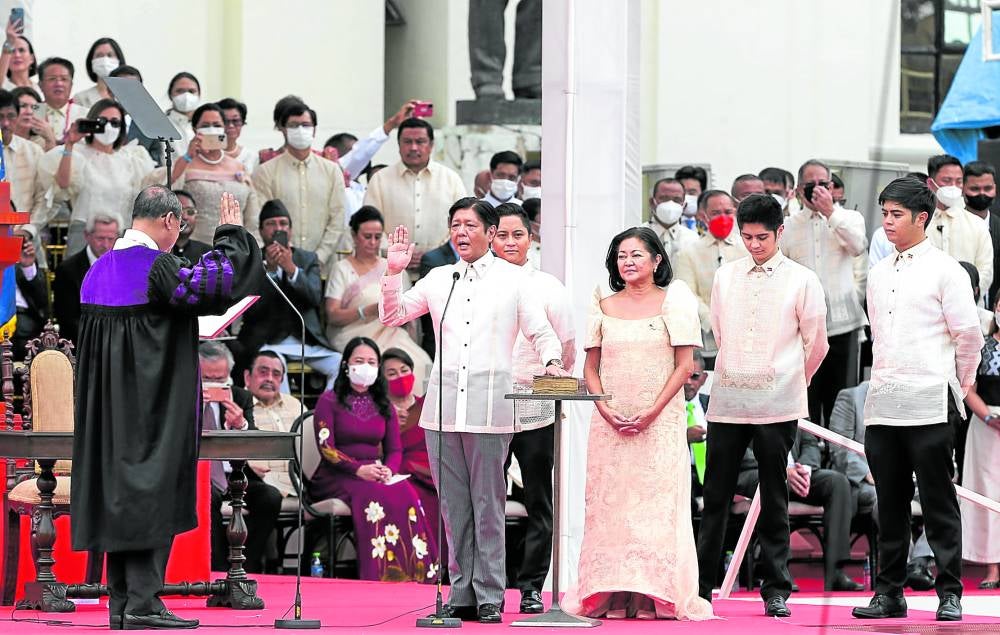 ‘THE PEOPLE HAVE SPOKEN’ Ferdinand “Bongbong” Marcos Jr. conceded that he “did not talk much” or debated with his rivals during the campaign. Pulling off a resounding victory despite all that, he offered the broad strokes of what he plans to do to lead the country out of its many crises, in his inaugural speech as the country’s 17th President. Administering his oath of office on Thursday was Supreme Court Chief Justice Alexander Gesmundo, with his first lady Louise “Liza” Araneta-Marcos and their sons Ferdinand Alexander, Joseph Simon and William Vincent sharing the historic moment onstage. —LYN RILLON

“I will try to spare you, you have your other responsibilities to carry. But I will not spare myself from shedding the last bead of sweat or giving the last ounce of courage and sacrifice,” he said in his inaugural speech.ADVERTISEMENT

He gave tribute and praise to his father, the late ousted leader who ruled the country for 20 years, as well as set the elder Marcos’ supposed achievements as the benchmark for his own administration.

“Believe. Have hope. The sun also rises like it did today and as it will tomorrow. And as surely as that, we will achieve the country all Filipinos deserve,” he said in an allegorical clincher to his 26-minute speech.

Mr. Marcos, 64, took his oath of office before Chief Justice Alexander Gesmundo at the National Museum for Fine Arts, the former Legislative Building that was shut down by his father, who declared martial law and ruled by decree from 1972 until he was toppled in the 1986 People Power Revolution.

Without directly referring to his father’s dictatorial regime, the new President said he wanted Filipinos to be forward-looking and not to dwell on what had happened.

“I am here not to talk about the past,” he said. “I am here to tell you about our future. A future of sufficiency, even plenty of readily available ways and means to get done what needs doing—by you, by me.”

But he himself could not help harking back to the days of “glory” under his father, although avoiding any mention of the allegations of human rights violations, corruption and ill-gotten wealth amassed by the late dictator.