One Year Later, House Republicans Say WH, State Dept. Had ‘Head in the Sand’ Over Fall of Kabul

One year after Kabul fell to the Taliban, a senior Republican lawmaker on Sunday accused the White House and State Department of having had “their head in the sand, not wanting to believe” what the Pentagon and intelligence agencies were advising about the security situation, “and therefore not adequately planning” for what would happen.

Speaking ahead of the release of a minority report on the tumultuous withdrawal from Afghanistan, Rep. Michael McCaul (R-Texas), ranking Republican on the House Foreign Affairs Committee, said there had been a “disconnect” between intelligence on the ground and the “rosy picture” painted by the White House.https://www.mrctv.org/embed/573105

“There were so many mistakes,” McCaul said on CBS’s “Face the Nation,” recalling hearing from the intelligence community and the military warnings that the Taliban’s takeover of Kabul was “going to be imminent, is going to fall sooner rather than later.”

“And then we went to State, and they paint – and the White House – a very rosy picture. There’s a disconnect between, you know, intelligence on the ground and what the White House is doing.”https://095646f2e77ad2ebba3fe4c32bfe3148.safeframe.googlesyndication.com/safeframe/1-0-38/html/container.html

“And this report, it says it all,” he continued, holding up a copy of the report and pointing to images on the cover showing U.S. military helicopters during the evacuation in Kabul, and during the 1975 evacuation from Saigon.

“Like, there’s no way we’re going to evacuate embassy personnel from helicopters like we did in Vietnam,’ he said, paraphrasing President Biden. “And of course, we know that happened.”

(Biden told reporters in July last year that the Taliban was “not remotely comparable in terms of capability” to the North Vietnamese Army in the 1970s, and added, “There’s going to be no circumstance where you see people being lifted off the roof of a embassy in the – of the United States from Afghanistan. It is not at all comparable.”)

As Biden’s announced withdrawal of U.S. forces by August 30 neared its final stages, Taliban fighters seized districts and provincial capitals across the country. With the radical militia moving on Kabul the national army and elected government collapsed and President Ashraf Ghani fled. 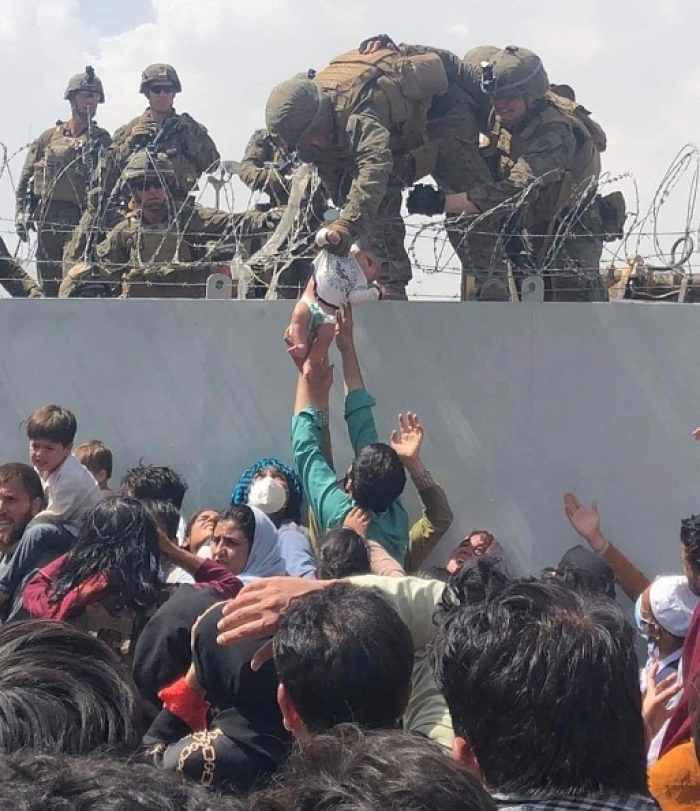 A U.S. Marine helps lift an Afghan infant over a barbed wire fence during the chaotic evacuation at Kabul airport on August 19, 2021, four days after the capital fell to the Taliban. (Photo courtesy of Omar Haidiri/AFP via Getty Images)

The Pentagon then had to deploy troops back into the country to oversee a fortnight-long evacuation mission from Kabul airport, flying out some 124,000 people desperate to flee a country under Taliban rule, an episode characterized by often chaotic scenes and a terrorist attack that killed 13 U.S. service personnel and more than 160 Afghan civilians.

“Who specifically needs to be held accountable, if anyone here?” CBS host Margaret Brennan asked McCaul. “And is it simply just a matter of – this was an intelligent failure, that the government would fall as quickly as it did, that the former president would have fled? How do you respond to that, that there was an inability to plan for this because it was not predicted?

“The problem was the White House and – and State Department putting their head in the sand, not wanting to believe what they were saying, and therefore not adequately planning.”

The Taliban had offered that the U.S. take control of Kabul and secure it for the evacuation, but McKenzie had responded that that was not the task he had been assigned to do by the commander-in-chief.

“Think about what that would have changed,” McCaul said. “We had to rely on the Taliban to secure the perimeter of HKIA [Hamid Karzai International Airport]. That led to the chaos. It also led to a suicide bomber that killed 13 service members – men and women – and injured over hundreds of people. And it could have been avoided.” 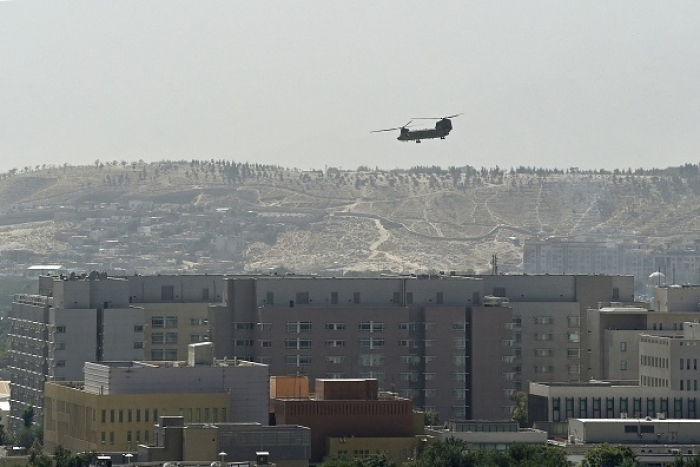 A U.S. Chinook military helicopter flies above the U.S. Embassy in Kabul on August 15, 2021, the day the Afghan capital fell to the Taliban. (Photo by Wakil Kohsar/AFP via Getty Images)

Testifying before the House Armed Services Committee last September, McKenzie said his task at that meeting with the Taliban’s then chief negotiator – now “deputy prime minister” – Abdul Ghani Baradar, had been to warn that the Taliban would face severe punishment if it interferred with the evacuation mission.

“As part of that conversation, he said, ‘Why don’t you just take security for all of Kabul?’” McKenzie told the panel. “That was not why I was there. That was not my instruction, and we did not have the resources to undertake that mission.”

He also said that he had not considered Baradar’s offer to have been a formal one, “so I did not pursue it.” It had been conveyed up his chain of command, McKenzie stressed.

In one of his last media briefings before retiring from active duty, McKenzie told reporters at the Pentagon last March that Baradar’s offer was “off-the-cuff” and not serious.

He added, “If we had gone in to do that mission, it would have required the introduction of vastly more U.S. combat power – at least a division, with enabling elements from the corps, in order to conduct that mission. The Taliban would never have stood for that.”

In their new report, the House Republicans name more than 30 current and former administration officials they want to appear in open hearing – or risk being subpoenaed if the GOP retakes control of the House in the midterm elections – to answer questions about the Afghanistan exit.

Brennan told McCaul that the State Department says that “it has tried to comply with your committee.”

McCaul disagreed, saying, “They have not not complied with our investigation.”