A diplomatic furor has erupted in Geneva after a member of a United Nations-appointed commission of inquiry focused on Israel told an interviewer that the “Jewish lobby” was funding a social media campaign to discredit the inquiry, and wondered whether Israel deserved to be a member of the U.N. at all.

Diplomats from the U.S., Israel, Britain, and Canada condemned the comments by Miloon Kothari, one of three members of the “independent international commission of inquiry” (CoI) created by the U.N. Human Rights Council (HRC) last year.

Israel’s ambassador to the U.N. in Geneva, Meirav Eilon Shahar, said she had written to the HRC president, calling for Kothari’s resignation.

U.S. ambassador to the U.N. in Geneva Michele Taylor and U.S. special envoy to monitor and combat antisemitism, Deborah Lipstadt, in a joint statement called the comments “outrageous, inappropriate, and corrosive.”

They called on U.N. high commissioner for human rights Michelle Bachelet to repudiate them, and to “take steps to ensure U.N. human rights monitoring and investigative mechanisms remain fully objective and impartial.”

The CoI’s chair, Navi Pillay – herself a former U.N. high commissioner for human rights – pushed back in a letter on Thursday to the president of the HRC, claiming that Kothari’s words “seem to have been deliberately taken out of context.”

As reported earlier, these were the specific words from Kothari, in a podcast interview, that are under fire:

“We are very disheartened by the social media that is controlled largely by – whether it’s the Jewish lobby or it’s specific NGOs, a lot of money is being thrown into trying to discredit us.”

“One of our mandates is to look at the role of both humanitarian law, human rights law, criminal law – and on all three counts Israel is in systematic violation of all the legislation. I would go as far as to raise the question, ‘Why are they even a member of the United Nations?’ Because they don’t respect – the Israeli government does not respect its own obligations as a U.N. member-state. They in fact consistently, either directly or through the United States, try to undermine U.N. mechanisms.”

In her letter, Pillay wrote, “The Commission does not question the status or United Nations membership of either of the concerned states of its mandate.” (The other “state” she refers to is Palestine, which is neither a sovereign state nor a U.N. member-state.)

As for Kothari’s remark about the “Jewish lobby,” Pillay said his words “were again deliberately misquoted to imply that ‘social media’ was controlled by the Jewish lobby.”

She said the CoI “takes great exception to personal attacks against individual Commissioners” appointed by the HRC.

“Such attacks have been continuously directed against all three Commissioners throughout our tenure, and it is to this that Commissioner Kothari was making reference.”

Pillay’s appointment to head an inquiry which – in the U.N.’s words – must be “guided by the principles of independence, impartiality, objectivity and integrity,” was controversial, given her own record.

The South African jurist has backed the boycott, divestment and sanctions (BDS) campaign targeting Israel, and has signed petitions lobbying governments to punish “apartheid Israel.” (A legal brief submitted by the NGO U.N. Watch early this year challenging her appointment detailed the concerns.) 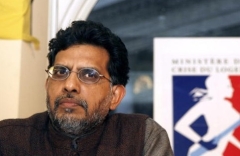 Miloon Kothari, one of the three members of the HRC-created commission of inquiry. (Photo by Bertrand Guay/AFP via Getty Images)

The HRC set up the commission of inquiry following an 11-day conflict between the Israeli military and rocket-firing terrorists in Gaza in the spring of last year.

The U.S. government was critical of the CoI from the outset, calling its unusual open-ended mandate biased and unfair.

In their statement, Taylor and Lipstadt reiterated that stance, saying the U.S. “firmly and consistently opposes the open-ended nature of this Commission of Inquiry, which only reinforces the reputation of U.N. bodies as vulnerable to the actions of member states intent upon isolating and excoriating the state of Israel.”

In other reactions from Geneva-based diplomats, Canadian ambassador Bob Rae said Kothari’s comments were “unworthy of the U.N.” and “a disgrace to institutions supposedly dedicated to the rule of law.”

British ambassador Simon Manley called the remarks “unacceptable and offensive,” and said that “antisemitism has absolutely no place in the U.N.”

“There should be no place for such antisemitism and anti-Israel sentiment at the U.N.,” said U.S. ambassador to the U.N. Linda Thomas-Greenfield. “These remarks by a CoI commissioner at HRC cannot go unaddressed.”

Bipartisan legislation introduced in the U.S. House and Senate earlier this year targets the CoI, seeking to reduce U.S. contributions to the U.N. by 25 percent of the amount budgeted for the commission, unless the State Department certifies that it has been abolished.

The HRC’s operating budget comes in part from the overall U.N. regular budget, 22 percent of which comes from U.S. taxpayers.