Where are the Taliban’s missing leaders? Rumors swirl over fate of two top officials

The Taliban’s leaders are rarely seen at public events and do not readily grant interviews or hold news conferences. Many of them move in the shadows, their whereabouts unknown, inevitably generating rumors about their health and about possible internal disagreements.Those rumors gained so much traction in recent days that the Taliban’s spokesmen have been forced to fend off questions about whether one of the most prominent figures in the group, Mullah Baradar, was injured or even killed in a dispute in Kabul in the past week with the powerful Haqqani network, which holds key positions in the interim government.Similarly, Taliban officials have repeatedly said that the movement’s supreme leader and commander-in-chief, Haibatullah Akhundzada, would soon make a public appearance. He hasn’t — fueling rumors that he is sick or even dead.

In other countries, a politician subjected to such speculation would call a news conference or make a television appearance to set the record straight. In Baradar’s case, a 39-second audio recording of modest quality was released Monday, along with a hand-written note from his assistant. No video or images were forthcoming. The last time Baradar was seen was in a fleeting appearance at a Kabul hotel in the first week of September.

In the audio clip, Baradar purportedly says: “There are some talks in in media. I had been out on a trip during these days. I had gone somewhere and praises to God we are all well. Some of these media networks do this kind of propaganda and tell such shameful lies. Reject this talk with courage. There are no issues no problems, praises to God. I am assuring you 100%.”

The Taliban want to lay down the law. Far outside Kabul, rural Afghans just want to get paidBaradar is the head of the Taliban’s political office and led the Doha negotiations with the former government and the United States. Some expected he would be named prime minister, but after prolonged negotiations on the shape of the new government, Baradar was named a deputy prime minister.Rumors of internal rifts were fed by Baradar’s absence from the delegation which met Qatari Foreign Minister Sheikh Mohammed bin Abdulrahman Al-Thani in Kabul on Sunday. Taliban officials explained that he was not in Kabul but had gone to Kandahar, where the supreme leader Haibatullah Akhundzada is said to be based.The invisibility of the Taliban leadership is not a new phenomenon. This is not a group that feels the need to communicate with the outside world. In many ways, the Taliban’s PR effort has become much more sophisticated in the last couple of years, with social media accounts in several languages and spokesmen like Zabihullah Mujahid holding news conferences. The Taliban produced a prodigious volume of video as its fighters stormed across the country in August.But that more assertive communications strategy does not extend to leaders who have spent much of their lives fighting guerrilla warfare and in some cases years in prison. The Taliban remain a secretive organization.Azaz Syed, a Pakistani journalist who has reported on the Taliban for years, told CNN: “Most of the key Taliban leaders — particularly from Haqqani family — avoid public exposure or appearance as they are convinced that their identity would help the ‘enemy’ to target them.” Old habits, it seems, die hard.There is no better example of the Taliban’s attitude towards publicity and transparency than the circumstances of the death from tuberculosis of its co-founder and first leader, Mullah Omar. He died in 2013, but the group did not disclose the fact until two years later. That in itself was an indication of the deep divisions within the group, especially over peace negotiations, which many of the Taliban’s military commanders resisted. So acute were the divisions that some commanders quit the group to join the emerging ISIS affiliate in Afghanistan. 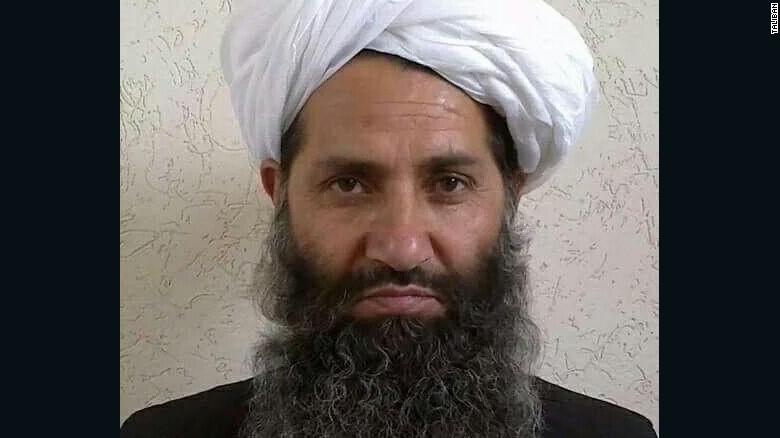 Officials have repeatedly said the Taliban’s top leader, Haibatullah Akhundzada, would soon make a public appearance. He hasn’t yet.The current supreme leader, Haibatullah Akhundzada, was elected in 2016 at a fractious meeting of the leadership council, or shura, in the Pakistani city of Quetta — the Taliban’s headquarters in exile. He has not made a public appearance in the five years since. For much of 2020, not a single statement emerged in his name. A senior Taliban official, Moulawi Muhammad Ali Jan Ahmed, told Foreign Policy last year that Akhundzada had been stricken with the coronavirus, which affected many senior Taliban officials.”Our leader is sick, but he is recovering,” Ahmed told Foreign Policy in an interview in June 2020. Other Taliban sources told Foreign Policy they thought Akhundzada had died of Covid-19.In the month since the Taliban took power in Kabul, only one statement has been issued in Akhundzada’s name, in which he said: “I assure all the countrymen that the figures [ministers in the Taliban government] will work hard towards upholding Islamic rules and Sharia law in the country.”

Afghanistan is now one of very few countries with no women in top government ranksIf there are serious divisions within the Taliban leadership today, they may have their roots in that 2016 shura. A compromise was reached to hold the group together, with two deputies appointed: Mullah Yaqoob, the son of the Taliban’s first leader, Mullah Omar; and Sirajuddin Haqqani, leader of the Haqqani network.They are both in the new government, as defense and interior ministers, respectively. Little has been seen of either man despite their importance in holding the key security portfolios.However, Sirajuddin’s uncle Khalil, appointed as the minister for refugees, has been more visible, addressing tribal gatherings and even granting interviews to select foreign journalists. Azaz Syed of GeoNews met him in Kabul last month.

“Among the Haqqanis, Khalil Haqqani is indeed more visible in the social gatherings,” Syed said. “However, he is also very careful about his security — whenever he moves in the city, a convey of cars and security guards of the Special 313 Brigade give him security.” The protection is perhaps not surprising, as he has a $5 million bounty on his head courtesy of the US government, while his nephew Sirajuddin has a $10 million bounty.In this febrile atmosphere, anything that emerges about a dispute or clash between rival elements will be in carefully-phrased whispers off-the-record. The Taliban’s internal machinations and decision-making give new definition to the word opaque.