Pol Espargaro says the struggles he had in riding the Honda in last Sunday’s hot MotoGP Aragon Grand Prix, in which he was “super slow”, was “painful”. 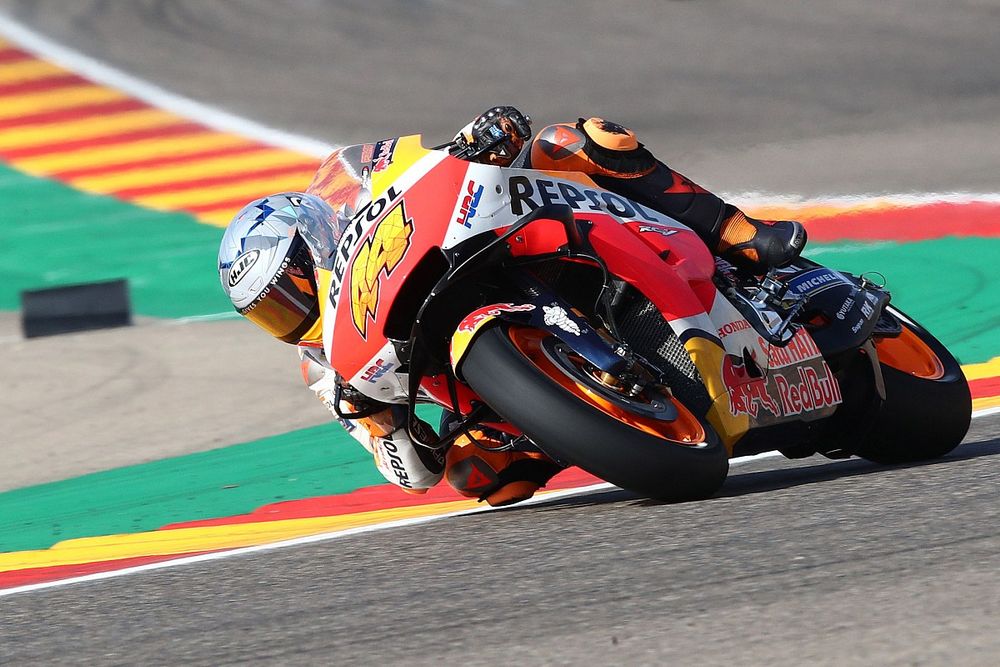 The Honda rider enjoyed his best weekend of his 2021 campaign at Silverstone two weeks ago, when he took profit of the cooler conditions and increased track grip to secure pole and finish the race fifth.

After a solid qualifying to eighth at Aragon, Espargaro slumped to 13th in the 23-lap grand prix as he struggled for form in much hotter conditions and on a circuit with much lower grip.

As with so many of his issues on the Honda this year, Espargaro believes it is all down to a lack of experience on the bike.

“Well, I think it’s the experience,” he said when asked how he can fix his problems in hot conditions.

“It’s the only thing it can maybe be, because riding the bike for as many hours as possible and then you understand how to get the maximum out of it with the hot conditions because in low temperature, or high grip, or even time attack I’m understand how to ride the bike and I’m fast.

“I’m one of the fastest, this is good because I understand how to do a time attack without crashing or [I’m] consistently fast alone, like this weekend, and I can be there for sure.

“But then in these hot conditions, I don’t know. I need to discover [how to ride them] like I discovered how to do a time attack without crashing.

“I need to be faster in those conditions, where now I’m super slow and it’s painful.

“I feel very bad, to not perform well I’m feeling like… it’s not that I’ve made a mistake, I don’t know what to do to be faster in those conditions.

“It’s painful, because also Misano looks like it’s going to be very similar and I’m going to struggle as well.

“So, it cannot be like every time there is hot conditions and low grip I struggle as much, it’s not possible.”

Explaining what goes wrong in hot conditions on the bike, Espargaro says the Honda becomes “aggressive” and he lacks grip on the rear, which in turn causes problems with front grip on corner entry.

“Well, it produces an aggressive feeling, like you are floating on the bike,” he added.

“You’re not stopping where you need, it’s always feeling that you’re going to lose the rear, always sliding a little.

“And then because the rear is not there, the front is suffering. In the other bikes, for sure I had my tools to avoid them or try to use different ways of approaching the corners or exiting the corners.

“But here it’s useless. There was one moment in the race where I was a little bit better than the guys in front, but I was very slow. I was riding in 1m49.1s when I should be in 1m48.5s.

“It’s not a little, so something is really wrong. I’m doing things not good, and this is bad.”