By Jasmyn Wimbish 53 mins ago 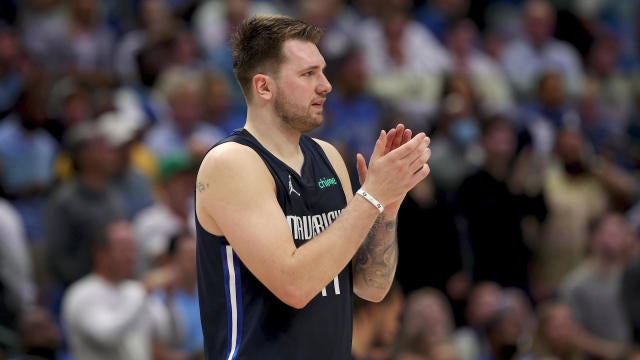 The Dallas Mavericks are one win away from advancing to the Western Conference semifinals after their 102-77 blowout win over the Utah Jazz on Monday night. From start to finish the Mavericks were dominant, feeding off a raucous crowd inside American Airlines Center to build up a 16-point lead at halftime. Luka Doncic put up 33 points, 13 rebounds and five assists in just his second game in this series after missing the first three games with a calf strain. Dallas also got 24 points from Jalen Brunson who continues his standout postseason performance.

On the other end of this matchup were the Jazz, who couldn’t get anything going on offense. The Mavericks built up an early lead, and Utah could never really make it competitive as Donovan Mitchell and Bojan Bogdanovic combined for just 11 points in the game.

With the win, the Mavericks move one step closer to securing a spot in the Western Conference semifinals against the winner of the series between the Phoenix Suns and New Orleans Pelicans. Those two teams will square off on Tuesday night in Phoenix in Game 5.

Here are three takeaways from Game 5 between the Mavericks and Jazz.

It’s been 15 days since Doncic went down with a calf strain in Dallas’ final regular-season game back on April 10. He sat out the first three games of this series, and it felt like the Mavericks were playing it close to the chest regarding the severity of his injury as well as the timeline for his return. That return finally happened in Game 4, in which Doncic put up 30 points, but you could see there was a little bit of rust as the Mavericks lost a close one on Saturday.

That was not the case Monday night in Game 5, especially in the third quarter where Doncic’s performance ended up being the final nail in Utah’s coffin. Nineteen of Doncic’s 33 points came in the third quarter, and by the time Doncic checked out at the start of the fourth quarter, Dallas built up a 24-point lead.

Over that 12 minutes of the third quarter, Doncic was relentless in hunting matchups and getting whatever he wanted. To open the quarter he rattled off six-straight points, showing no lingering effects of that calf strain. He executed well in pick-and-rolls, catching Bogdanovic on his hip and getting easy buckets at the rim:https://streamable.com/e/u0jx4s

And when that didn’t work, he’d reset, post-up Bogdanovic and easily knock down a mid-range turnaround jumper:https://streamable.com/e/tdpntt

When Doncic wasn’t maneuvering to the rim, he was sinking 3s in the third quarter, and with each made one the cheers inside American Airlines Center just grew louder. When Doncic returned in Game 3, there were concerns about the possibility of worsening his current injury, but his Game 5 performance — specifically in the second half — showed that he was operating at his typical All-NBA level, and that should be scary for the Jazz heading into what could be the last game of the series on Thursday.

Entering the playoffs, the Jazz had the league’s top-ranked offense, and ranked second in the league in 3-point attempts. Because of those two stats, I have to admit that I expected the Jazz to turn this series into a shootout, something they certainly would’ve won against the Mavericks. Instead what’s happened is the Jazz have been rather pedestrian on offense, and in Game 5 things took a turn for the worse.

Utah put up just 36 points in the first half, the lowest point total in a half this season for the team. On top of that, the Jazz shot an atrocious 10 percent from deep on 30 attempts. That’s one of those stats you have to quadruple check to make sure it’s accurate, but that’s just how bad Utah shot the ball Monday night. They didn’t shoot the ball much better inside the arc either, shooting just 37.7 percent from the field.

Some credit should be given to Dallas’ defense, because it was smothering Utah out on the perimeter. All series long the Mavericks have done a great job of running the Jazz off the 3-point line, and while they put some defensive pressure to impact some of those shots, a lot of what Utah was missing came off of really good looks.

It was like there was a lid on the rim for Utah, and it resulted in really poor scoring numbers from the starters. Mitchell finished the game with just nine points while going 4 of 15 from the field, Bogdanovic — who has really been the most consistent scoring threat for the Jazz in this series — had only two points on the evening. The leading scorer for Utah ended up being Jordan Clarkson off the bench with 20 points, and Rudy Gobert was the only other Jazz scorer to finish with double digits in points (17).

I don’t expect the Jazz to shoot the ball that poorly in Game 6 on Thursday, but it was definitely a demoralizing offensive night from Utah that has the potential to really zap some motivation from this team.