Council approves final design concept, but questions remain about how to fund construction

The Pleasanton City Council voted unanimously last week to advance the final design concept for a new skate park at Ken Mercer Sports Park, but funding for the estimated $8.5 million construction project remains very much up in the air.

The idea to expand the popular skate park facilities on Parkside Drive has been on the city’s to-do list for years and took close to a decade to pass to this stage of the approval process.

“I will say I’m a little embarrassed that a 2014 Parks and Rec. Master Plan is just now working on a project eight years later, and we still certainly haven’t funded it,” Mayor Karla Brown said at the March 15 council meeting.

The new design, which would be accessible to everyone, brought out enthusiasm from the council. It stretches over an acre in area and includes creative skateable furnishings, a plaza style skating area and a paved public space for viewing, including shaded picnic gathering areas with furnishings, drinking fountains and restrooms.

“I’m also extremely pleased to hear that all wheels can use this park and that’s very special to me, because we are staging the all-ability playground as well,” Brown said. “If people of all physical abilities and all skill sets can use this new skate park, I think that’s wonderful.”

Help sustain the local news you depend on.

The conceptual design was chosen from two proposed design plans after a community-wide survey and consultation with the city’s Parks and Recreation Commission.

“So from all of that input, we created one preferred plan and the final plan is a total of three acres of park improvements with one full acre of skateable space in the middle,” said Gina Chavez, project manager. “We have two entries to the park, one at each parking lot, one here, and then one at the Hopyard Shopping Center.” 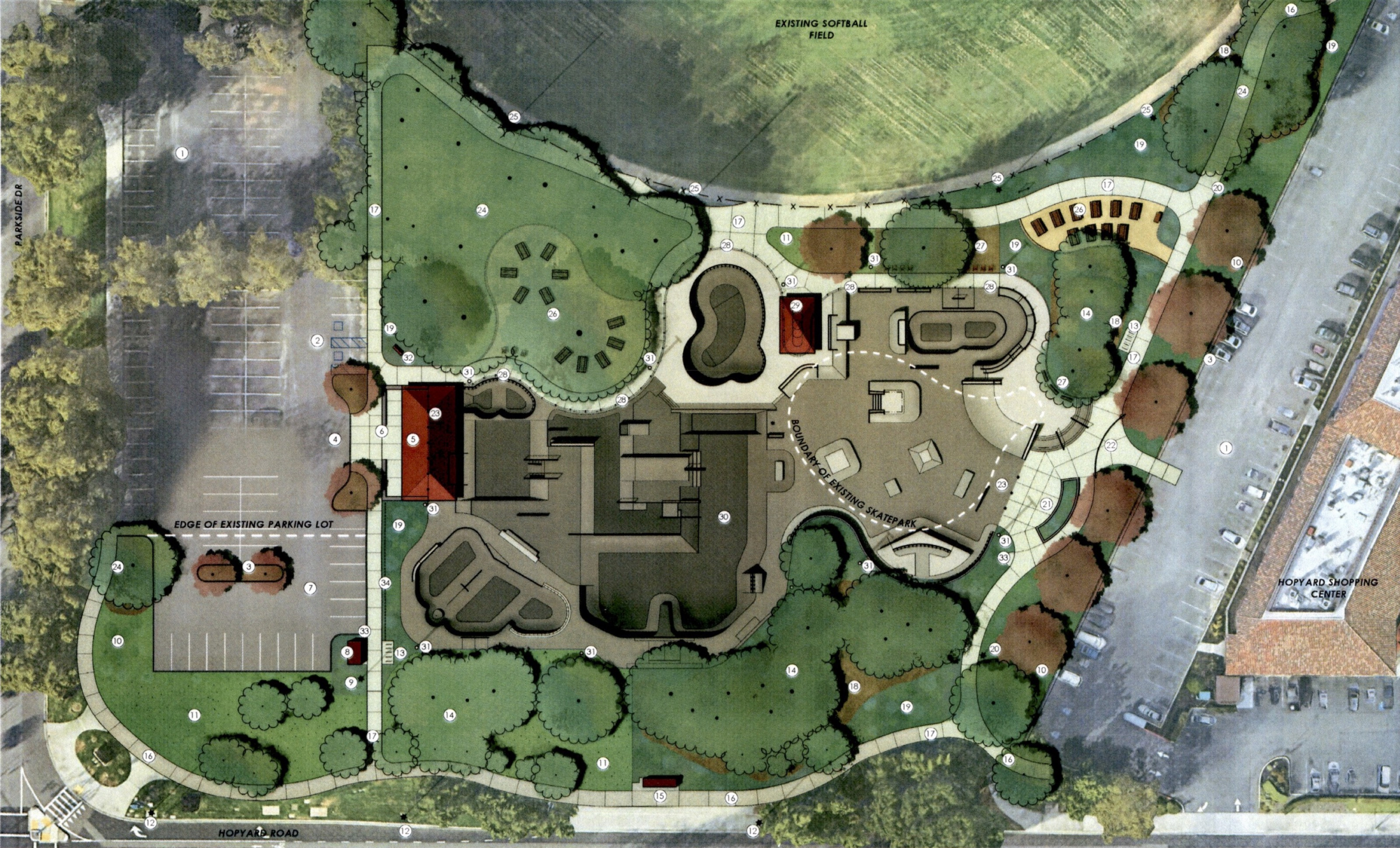 Overhead map shows layout of new skate park, under the concept endorsed by the Pleasanton City Council on March 15. (Image courtesy of city of Pleasanton)

Funding for the project has been a challenge. City staff are researching possible grant and fundraising opportunities but they are confident that, at a minimum, partial additional funding could be secured, according to the council report.

The estimated cost to build the park has doubled since inception, causing concern among councilmembers who expressed their shock.

The proposed skate park is estimated to cost approximately $5.7 million in direct costs with another $2.8 million budgeted for construction and design contingencies including mobilization, bonding and insurance — for a total projected construction cost of approximately $8.5 million.