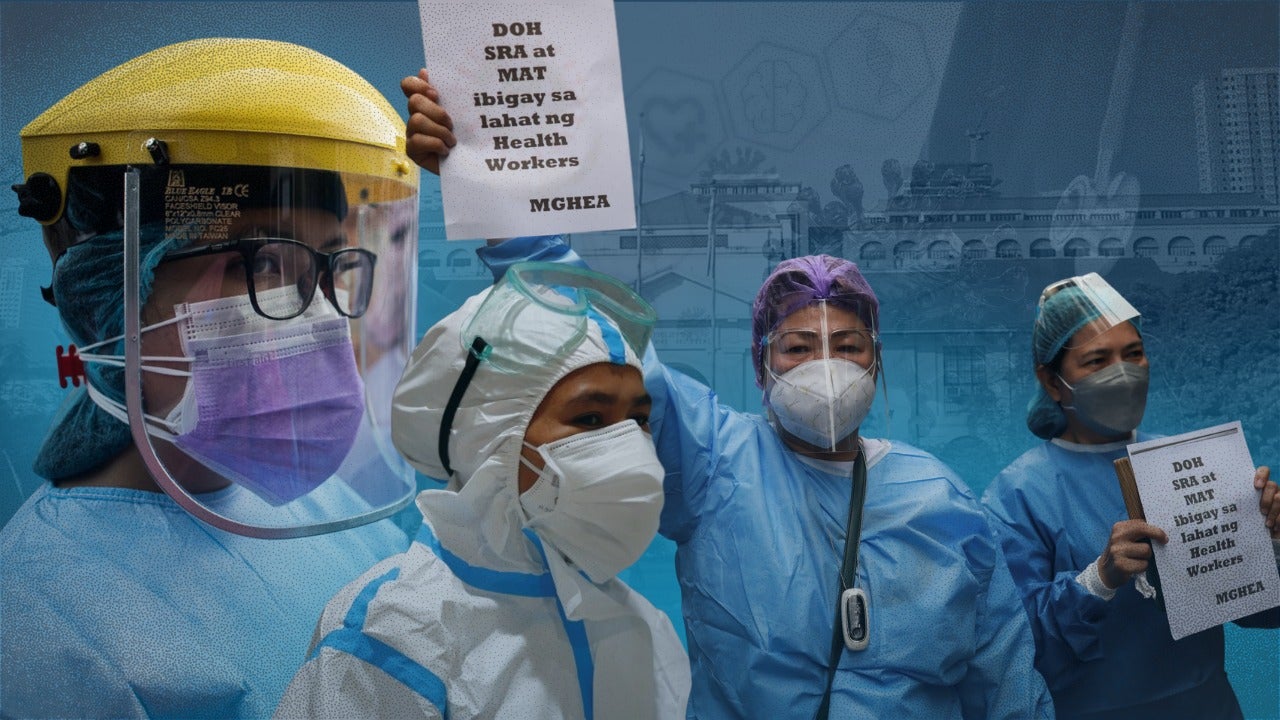 MANILA, Philippines—In March, 24-year-old Marie Umalla left for the United Arab Emirates (UAE), with the dream of providing for her family.

Umalla, who was a nurse for two years in a private hospital in Isabela province, said that with the P10,000 wage that she was receiving every month then, it was always hard to make ends meet.ADVERTISEMENT

“I realized that with how my work was being compensated, I won’t be able to provide for the needs of my family. This was the reason that I decided to leave the Philippines,” she told INQUIRER.net.

The group Filipino Nurses United (FNU) stressed that with low pay and lack of improvement in working conditions of nurses in the Philippines, “it is not surprising that they leave the country or the profession for greener pastures”.

Citing data from the Department of Health (DOH), FNU said out of 915,219 registered nurses in the Philippines, 316,415, or one-third, have already migrated.

This, as the group said that based on DOH data, there were at least 124,999 nurses with no specified field of practice, which means that they are either unemployed, underemployed, or have decided to change careers. 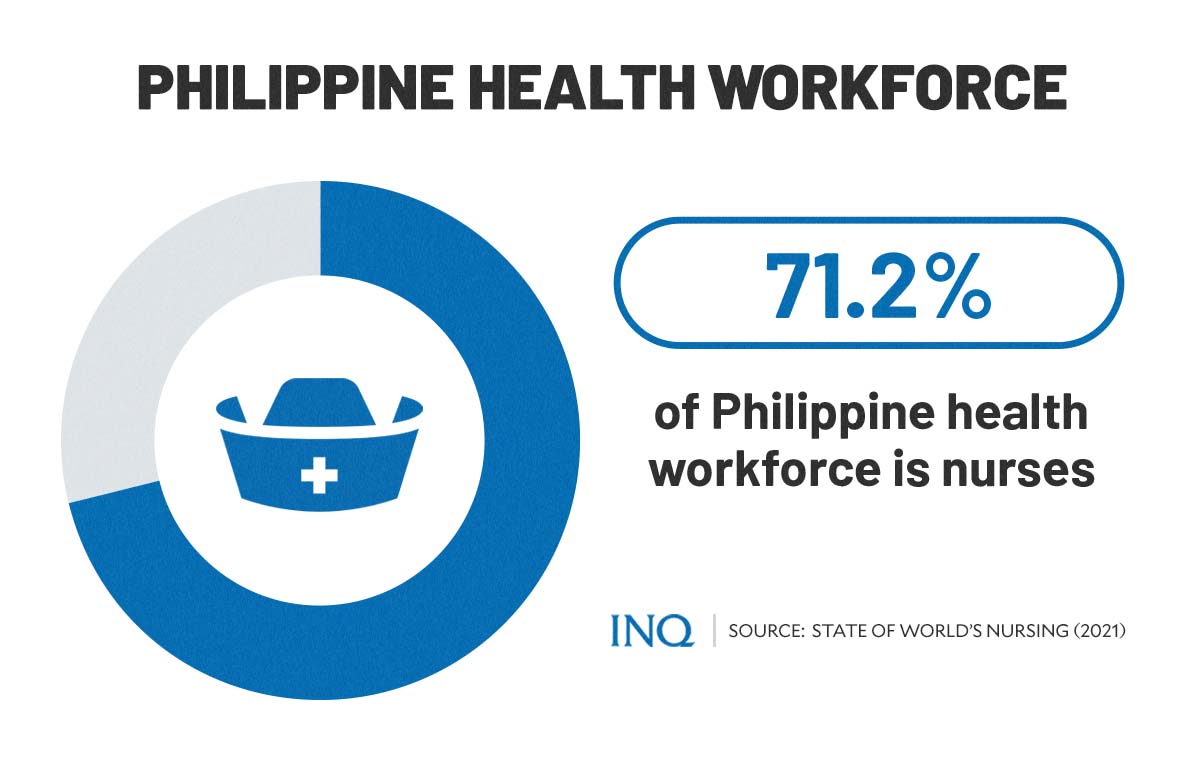 The group said that the main reasons that lead to massive migration of nurses have been so obvious and as long as these issues are not addressed by the government, “it would be irrational to stop nurses from leaving”.

Last Saturday (June 18), Health Undersecretary Maria Rosario Vergere asked the government to implement measures to stop the migration of health care professionals, mainly nurses, saying that “this should be a whole-of-government approach”. 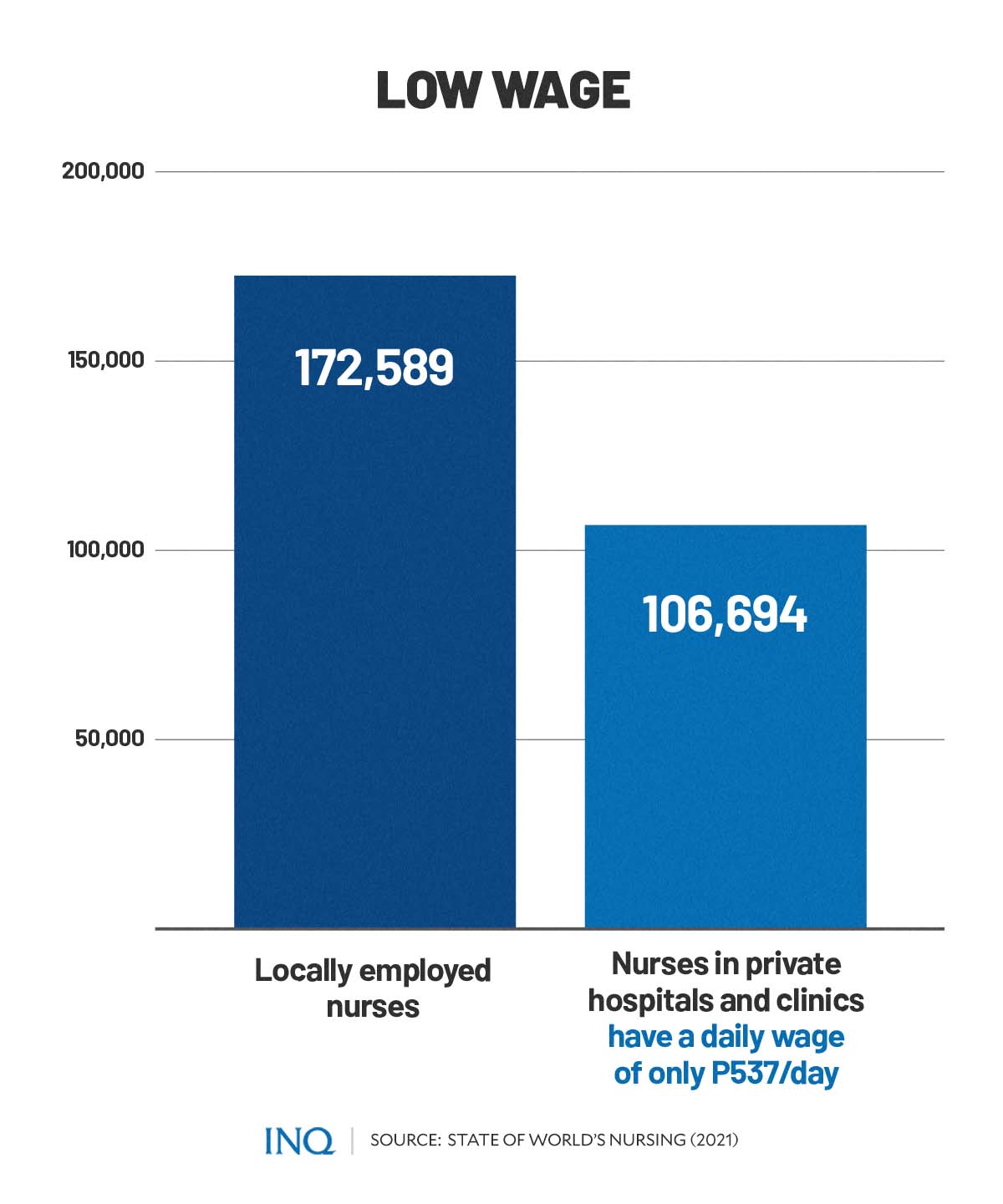 As stated in the State of World’s Nursing last March, 71.2 percent of the health workforce in the Philippines is nurses, but FNU said the government failed to go beyond words in valuing them and all other health care workers.

Last month, the Philippine General Hospital (PGH) said it was expecting more of its “skilled” health care professionals to resign to work overseas since more countries had already opened their borders.ADVERTISEMENT

PGH spokesperson Dr. Jose Jonas del Rosario told ABS-CBN that many countries have opened opportunities for health care workers: “We’re seeing a lot of resignations and some of them are really skilled”.

Rowalt Alibudbud’s “When the ‘heroes’ don’t feel cared for: The migration & resignation of Philippine nurses amidst the COVID-19 pandemic,” which was published in the Journal of Global Health, highlighted the need for nurses’ needs to be addressed.

Alibudbud, who is from the Department of Sociology and Behavioral Sciences of the De La Salle University, said that eventually, some nurses may leave the profession or try to go abroad since “it’s really not worth being a nurse at home”.

‘They shouldn’t stop us’

One of the health care workers who are now considering working overseas is 23-year-old Jed Toroy, a nurse in a private hospital in Cavite province who said that “we do not have enough compensation and benefits”.

He told INQUIRER.net that “opportunities from other countries serve as a rainbow end with a golden pot for most people like me, who can earn a lot more than working here in the country”.

For instance, Umalla, who was trying to just make ends meet with her P10,000 wage per month salary then is now receiving P50,000 to P60,000 per month for her work in a hospital in UAE.

FNU stressed that while the ideal nurse-patient ratio in hospitals is 1:12, a nurse, especially when COVID-19 cases are high, is taking care of 20 to 50 patients every shift.

“Leaving the country is one of the many choices a nurse can think of in their career, especially if that person will stand as the breadwinner of the family,” he said.

With a low monthly salary, he said nurses here in the Philippines can only provide for their personal needs and save a little.

Toroy said one cannot even recover his or her expenses in school. He said a student needs P700,000 to P800,000 to finish a degree in nursing. 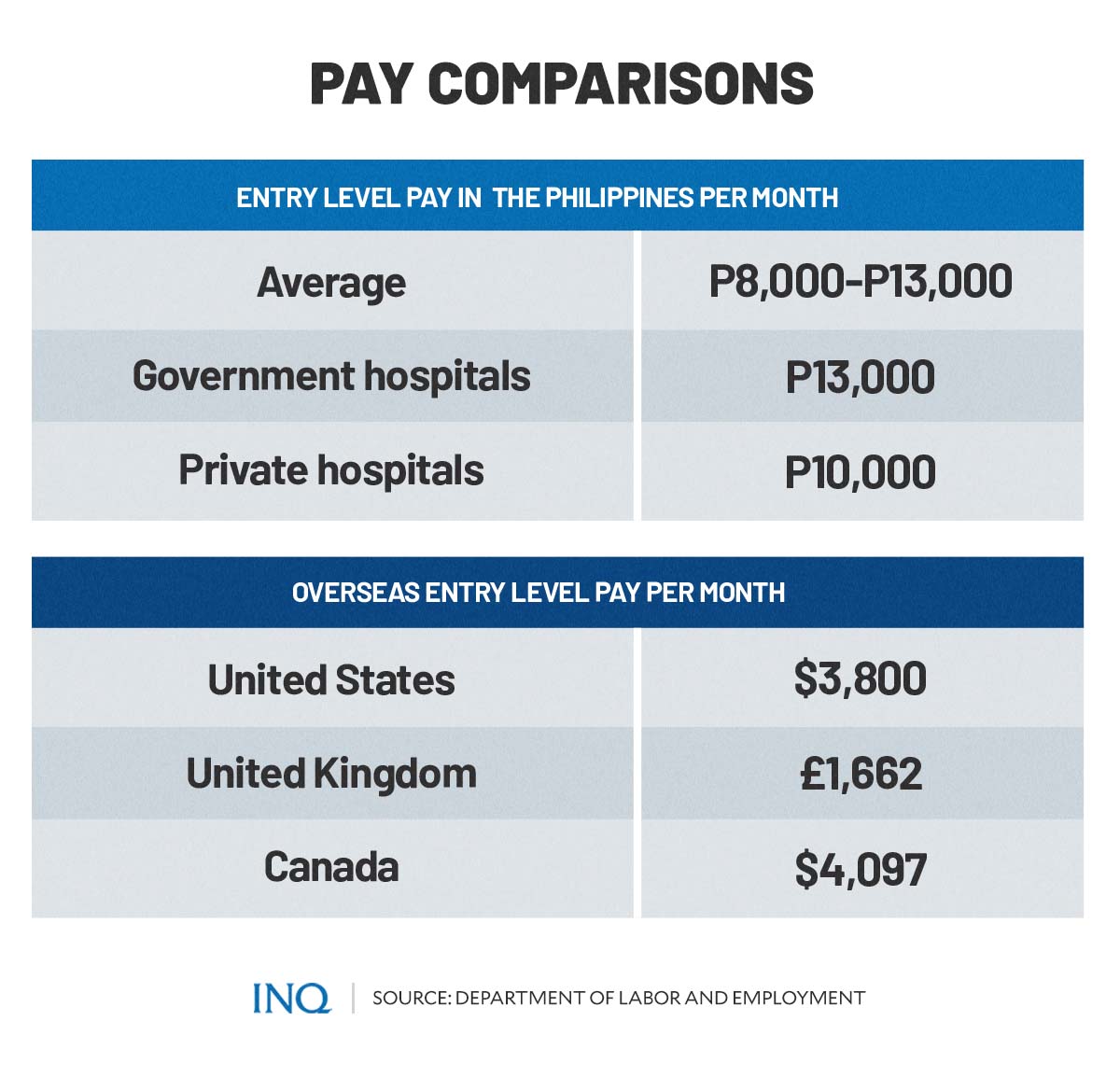 This, even if there is lack of improvement in the working conditions of nurses, like handling 20 to 50 patients every shift with unpaid extended work hours, FNU said.

It said there were only 65,895 government nurses when the Philippines was at the height of the COVID-19 crisis, stressing that there are 110 million Filipinos and that 3.7 million already fell ill because of COVID-19. 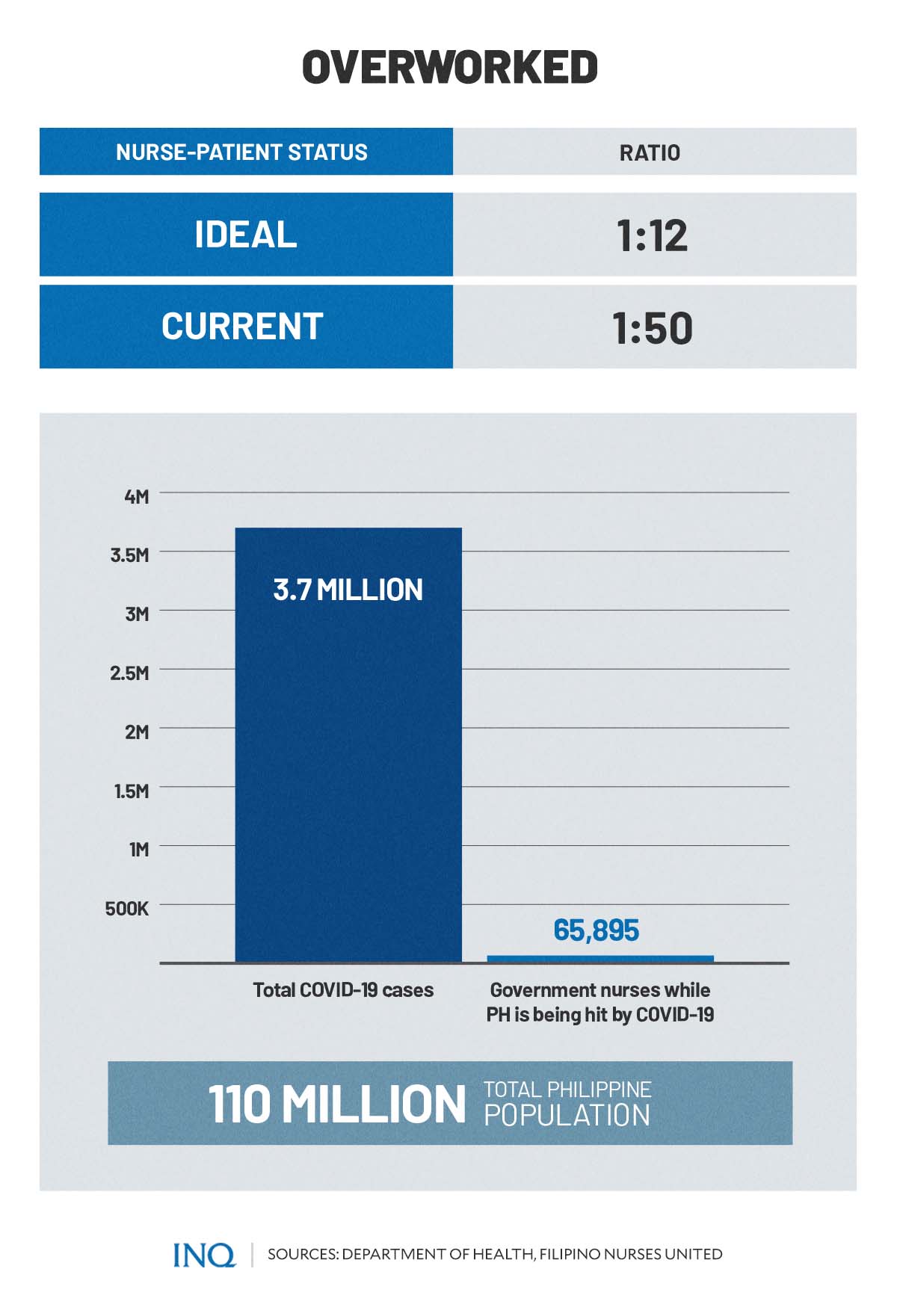 FNU said that in government hospitals, though they have relatively higher pay, nurses suffer from work and patient overload in the same way as those in private hospitals do.

“Moreover, a large percentage among government-employed nurses do not have regular positions, without benefits and who can be terminated anytime,” it said.

Last year, the government, through the DOH’s Nurse Deployment Program (NDP), employed 16,000 nurses as “contractuals”. However, FNU stressed that this was “ironic” since the DOH has 22,000 vacant plantilla, or regular, positions with much higher pay grades.

“Many NDP and Health Human Resource nurses were about to finish six months to one year contracts as contractual [employees] and were informed of being terminated,” FNU said.

The DOH said it is working to resolve the problems being confronted by nurses: “We are incentivizing our nurses. We’re giving them health care benefits and allowances, so they’ll be more interested in working in our country.”

However, FNU said that based on data from the DOH, 60 percent of health care workers have not received COVID-19 benefits and compensation. 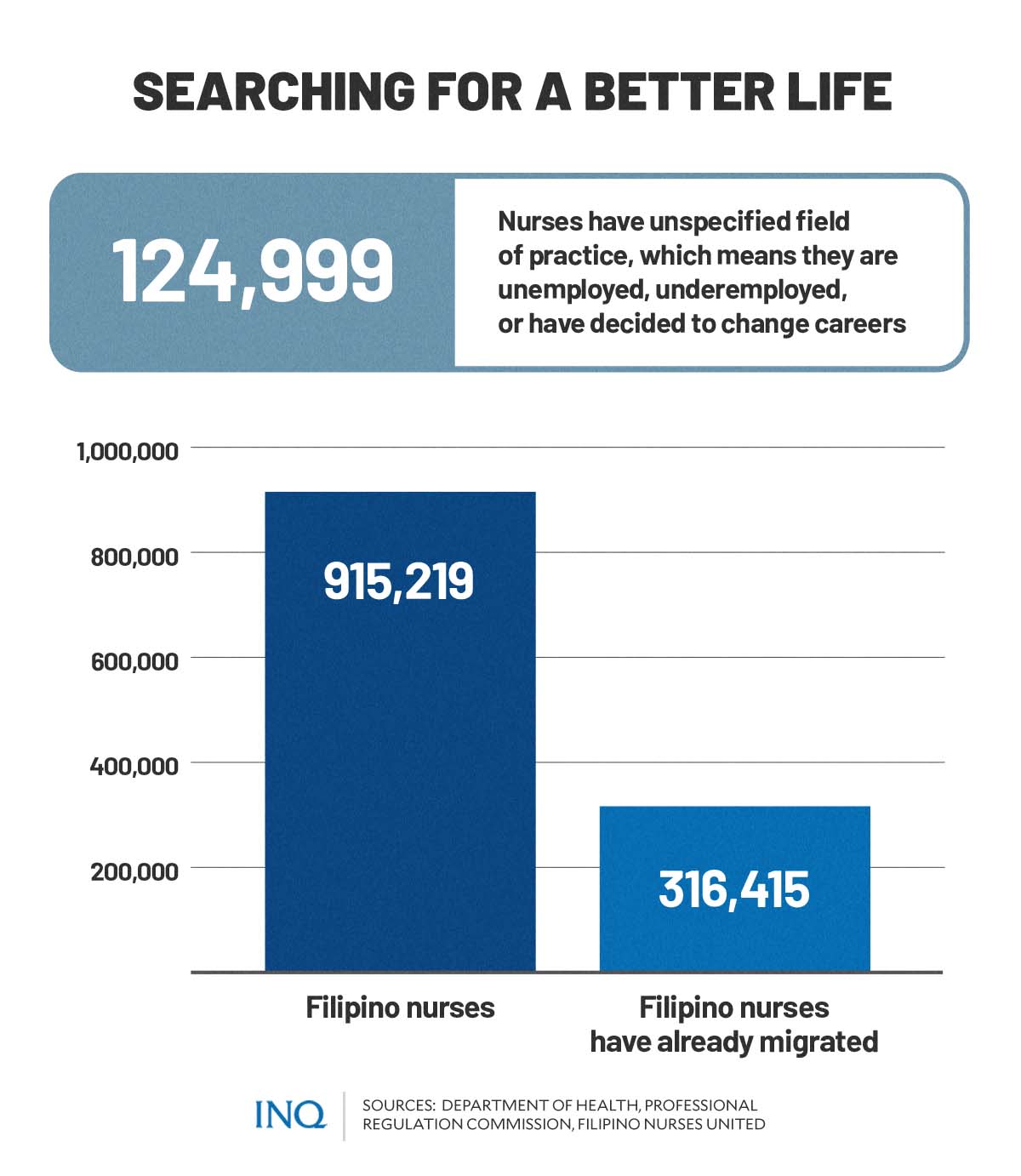 “The incentives such as benefits that can further motivate health workers to stay on are extremely lacking, inadequate or delayed […] This adds up to the extreme frustration of nurses who put their lives on the line especially this pandemic,” it said.

For Toroy, “we work hard day in and day out, sacrifice our health and even our families, and yet we are not prioritized and laughed at by officials”.

“Moreover, other hospitals in other countries offer new technologies and machinery that can aid in easing up the workload and efforts of nurses,” he said.

“Aside from this, some compensation for working abroad provides the ability to bring their families to live in other countries and have the time to be together while being financially stable”.

FNU stressed that it has been proposing measures to address the issue of exodus of nurses.

It said there should be a decent living wage for nurses of P50,000 (entry level) in government and private hospitals.

There should likewise be a safe nurse-patient ratio to address the problem of severe and chronic understaffing. It said all contractual nurses should be regularized.

“The DOH, being the vanguard of health workers, as they claim to be, must set an example of ensuring that laws are being enforced and implemented for nurses’ welfare,” it said.

“This could very well support nurses and eventually could help retain many nurses who opted to work in the country.”

For Toroy, the government “don’t have the right to stop us since they don’t know how we feel, do and experience […] we want what we deserve, and this time passion for others will not be sufficient”.

FNU said it is encouraging nurses to work here in the Philippines and serve Filipinos, however, “we support their aspiration to support their dreams for their families, especially if it is a matter of survival from deep economic hardships”.