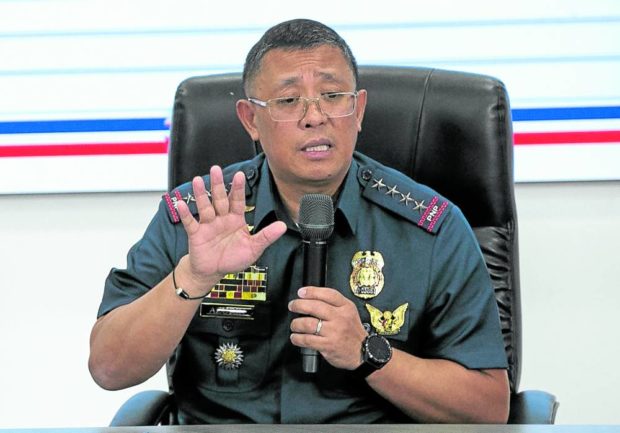 MANILA, Philippines — In light of the crimes that have recently been taking place on school grounds, the Philippine National Police (PNP) on Monday urged schools to let its uniformed personnel in its premises, saying that police presence may act as a “crime deterrent” in such areas.

PNP chief Gen. Rodolfo Azurin Jr. broached this idea in a news briefing after being asked about the stabbing incident at Culiat High School in Quezon City that resulted in the death of a 13-year-old student on Friday.ADVERTISEMENT

(We will require our PNP because, as I said, our presence shouldn’t be there only when classes open. The PNP should always be there, especially during school activities.)

Azurin then called on public and private schools to allow the PNP to beef up its presence on school grounds which, he said, may help deter crime.

(So I hope other schools, not just the public schools, even the private schools, would allow the presence of the PNP uniformed personnel in their school premises because that can also serve as a deterrent to crime. The presence of our police.)

Azurin then cited a practice by the police regional office (PRO) in Calabarzon, where its officers are tasked to raise the flag in schools.

(The good thing is if we can copy what PRO Calabarzon is doing in the flag raising when the school conducts its flag raising, police are the ones raising the flag so that students can see the presence of police in the school.)ADVERTISEMENT

According to the PNP chief, this will allow students to approach or call for police assistance at any time within school hours.

But as per the Department of Education Order No. 32, s. 2019, also known as the National Policy Framework on Learners and Schools as Zones of Peace, “schools, as a general rule, should be free from the presence of armed combatants, whether from government forces or armed groups.”

“Armed force protection units from government forces, if needed, shall be situated proximate to the school and not inside the school,” it further states.  Niña Cuasay, INQUIRER.net trainee