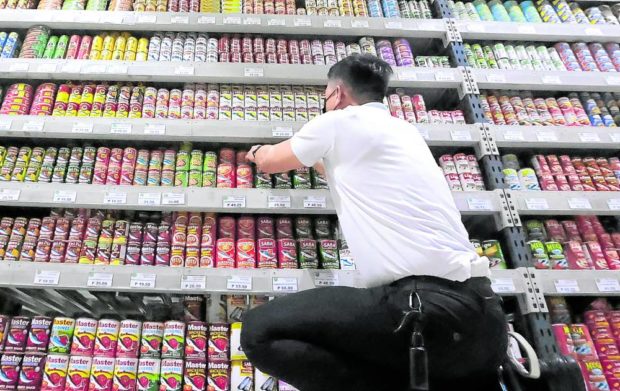 HARD TO REACH? Grocery items like canned sardines, a staple item in calamity relief packs, may no longer be that affordable even for low-income households. (Photo by GRIG C. MONTEGRANDE / Philippine Daily Inquirer)

MANILA, Philippines — Local manufacturers of basic goods and prime commodities such as canned sardines, processed milk, bread, and bath soap have asked the Department of Trade and Industry (DTI) to allow them to raise their prices, citing higher production costs.

At the Laging Handa briefing on Wednesday, Trade Undersecretary Ruth Castelo, head of the DTI’s consumer protection group, said that the requests for price hikes were under study with the figures presented by local manufacturers being validated.

The DTI originally intended to release an updated suggested retail price (SRP) bulletin this month, she added. “But we are not finished yet and we are still studying thoroughly when we will issue [the SRP bulletin],” Castelo said. “We are just finishing up on some important figures to make sure of the computation.”

According to her, local manufacturers had cited several factors that were affecting their production costs. “The first factor is the price of raw materials that they are using and buying from abroad. Many are imported. The logistics cost is also included since they are using fuel for distribution. And then the packaging materials used by many are also imported,” Castelo said.

In the DTI’s last updated SRP bulletin issued in August last year, the prices of 67 stock-keeping units (SKUs) on its list rose by between 3.29 percent and 10 percent. SKU is the technical term used by stores to identify and categorize specific inventories by brand or product type.

These included canned sardines which had a price increase of 6 percent, with a 155-gram can now selling in stores from as low as P13.25 to a high of P19.58.

The price of processed milk also went up by 3 percent to 10 percent, with a 150-gram pack of powdered milk currently selling from P44 to P93.

Instant noodles also became more expensive by 3.70 percent, with a 55-gram pack now sold in stores for P7 to P8.40.

Prices of bottled water were also hiked by 3.5 percent to 10 percent. A 500-milliliter bottle of distilled water now has an SRP of P8 to P17, compared to P6.75 to P11 for a similar-sized bottle of purified water.

Canned meat and processed canned beef also became costlier by 6 percent, with the price of a 150-gram can of corned beef today ranging from P20 to P39.75, and a similar-sized can of meatloaf from P16.50 to P24.13.

Geperzonn Lucas, a 36-year-old father of two, said that his family was luckier than most as he and his wife both had jobs.

“There’s two of us working so we are able to manage and make things work somehow,” said Lucas, who works as an engineer for a government agency, when asked to comment on the looming price increases.

“But we are really affected. The expenses for other things are getting diverted to grocery expenses,” he added.

According to him, he expects the rising costs of basic goods to have a greater impact on their living expenses once their young children start going to school.

Castelo, meanwhile, said that the DTI would meet with officials from the Department of Agriculture (DA) to address the rising prices of red onion and eggs in the local market.

“We are trying to address, together with the DA, the supply chain issues which factor into the market price of onion. Eggs are also included, and it has been discussed what help or intervention that the government can take when it comes to making bread,” she added. Pastry and bread makers earlier expressed concern about the rising price of eggs, a main ingredient in their products, on top of a possible supply problem.

Castelo said that they would submit their recommendations to President Ferdinand Marcos Jr. once he gets back from the World Economic Forum in Davos, Switzerland.

Based on the DA’s market monitoring report, locally produced red onions in Metro Manila markets were selling from P320 and P450 per kilogram as of Jan. 18, compared to P200 per kg a year ago.