(CNN)There are few firsts left to be made at Muirfield, home to a golf club founded in the mid-18th century.

Yet after hosting 16 men’s British Open Championships across 130 years, on Thursday, the women’s event will tee off at the fabled Scottish links course for the first time.It has been a long wait that looked set to be prolonged in May 2016 when the privately owned club’s members — The Honorable Company of Edinburgh Golfers — voted against overturning its male-only membership policy. Established in 1744 at Leith in Edinburgh, the club moved to the East Lothian site in 1891.

The result of that vote was labeled “obscene” by four-time major champion Rory McIlroy and “indefensible” by Scotland’s First Minister Nicola Sturgeon, and the Royal and Ancient (R&A) — organizers of the Open — promptly banned the course from hosting the major.

However, Muirfield was reinstated as an Open venue in March the following year after a fresh ballot saw the club vote 80.2% in favor of accepting female members, achieving the two-thirds majority needed to overturn the 2016 vote.Five years on, the course opens its doors for the fifth and final major of the women’s season, much to the delight of the participants.

It’s a family affair for two-time major champion Brooke HendersonIt will be a special kind of excitement for Scottish golfer Catriona Matthew who, beyond having the opportunity to experience a major just a short drive from home, will go down in history as the first woman to tee off at Muirfield in a Women’s Open.

“It’s a huge honor when you’re asked to do something like that,” Matthew, Open champion at Royal Lytham in 2009, told reporters Tuesday.

“I think it’s going to be a great experience … all the players will have watched the men play here over the years and I think they are delighted to have that opportunity to come here and play their own Open.

“That just elevates this championship, and we are now going to courses that people are used to seeing The Open and the majors on. I think it’s good for us.” 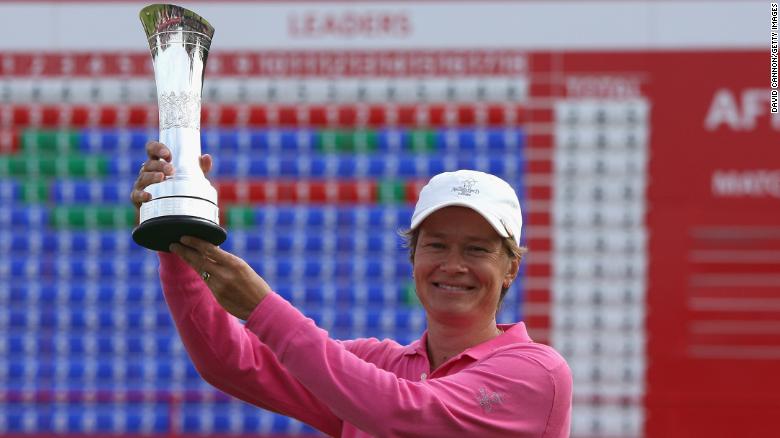 Matthew holds the trophy aloft following her Open victory at Royal Lytham St Annes Golf Club, England in 2009.The 52-year-old admitted she was “disappointed” with the initial vote to maintain male-only membership, but believes the reversal showed progress is being made.

“You just have to look forward rather than look backwards,” Matthews added. “Golf, starting in Scotland, we had a lot more traditions perhaps, that we’re just gradually moving with the times.”Hopefully any girls or boys who are golfing, they can see both the men and the women playing the same golf courses, which is good.”

Anna Nordqvist arrives in East Lothian as the defending Open champion, having clinched a one-stroke victory at Carnoustie last year. With her first major appearance coming as an amateur at the event in 2007, the triumph consolidated a “special” connection between the three-time major-winning Swede and the Open.

“I’ve heard a lot about Muirfield,” Nordqvist said. “I know the guys have played here over the years, so I think it’s an amazing opportunity for us to have Muirfield added to our Open rotation.”Coming in through the gate, (I) saw my picture — it’s the first picture you see — obviously it still feels pretty surreal to have my name on the trophy,” she added. 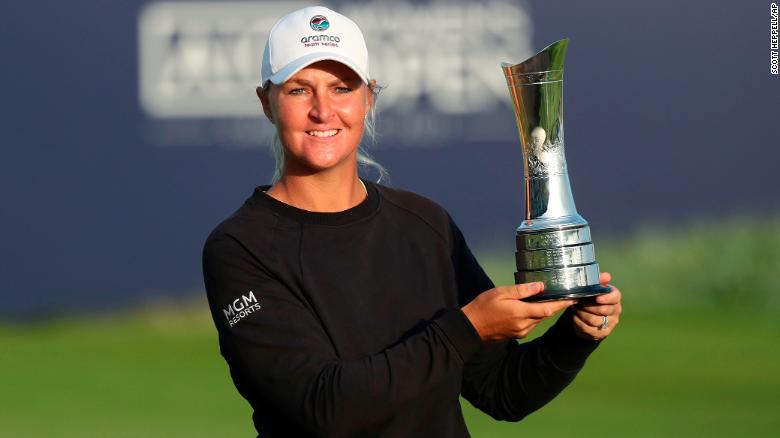 Nordqvist poses with the Open trophy after victory at Carnoustie in Scotland, 2021.A historic Open at Muirfield marks the continuation of a landmark week for women’s sport, following England’s footballing Lionesses’ first ever international championship win on Sunday, watched by a Euro final record crowd at Wembley Stadium.Despite the pain of seeing Sweden routed 4-0 in the semi-final by the eventual champions, Nordqvist sees parallels in the increased coverage of women’s football and golf.

“It’s just exciting to see that I think women’s sport (all) over the world is getting more attention,” she said.

“It was quite a big event, the way they were hosting it and the TV times, I think that’s very important. Our tee times are getting better, too. A lot of times, we tee off early because (of) … the guys’ schedule.”

While Nordqvist tees off as reigning champion, Brooke Henderson starts as arguably the form player.With her second major victory at the Evian Championship in July, the Canadian made it two Tour wins in just over a month.

The 24-year-old has finished no lower than 16th in any of her previous five events.After withdrawing from the Scottish Open, won by Japan’s Ayaka Furue on Sunday, Henderson is “recharged” and raring to go. 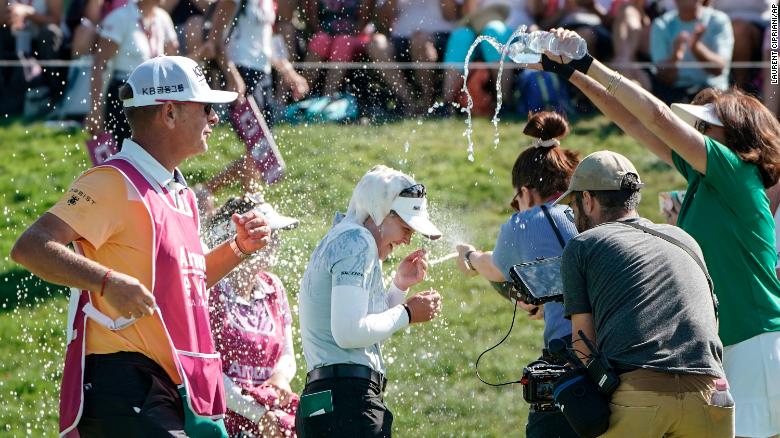 Brooke Henderson center, celebrates after winning the Evian Championship.”To be playing this year, it really means a lot to all of us,” she said.

“It’s just proof that the women’s game is continuing to grow — the purse sizes are increasing, we’re on network TV more, and we’re playing these better venues.

“It’s just a really fun time to be a part of women’s golf, because it is growing so much and we feel like we’re making a difference for future generations.”After a three-month hiatus that began in March, due to a blood clot, World No. 3 Nelly Korda is relishing every second back on Tour, especially ahead of a landmark major.

Fan picks up Nelly Korda’s ball while it’s still in play at women’s golf major“I was extremely excited to come out and play this event this year,” she said.”I knew the history, and the fact that we were going to be the first female tournament out here, too, was pretty amazing.

“So I was just more excited to actually be out here and to get to play this golf course and soak it all up, as well as the history of this place.”Catriona Matthew is set to tee off first in her group alongside Sophia Schubert and Louise Duncan at 6:30 a.m. local time (01:30 a.m. ET) on Thursday.